Hello there! Monday’s here again, so it’s time for another update on my reading and viewing activities.
This will be a short one though, because I haven’t been able to do a lot of reading and watching, and I haven’t added anything to my TBR pile or watchlist either.
But still, let’s get started.

What I’ve read, what I’m currently reading & what I’ve added to my TBR pile: 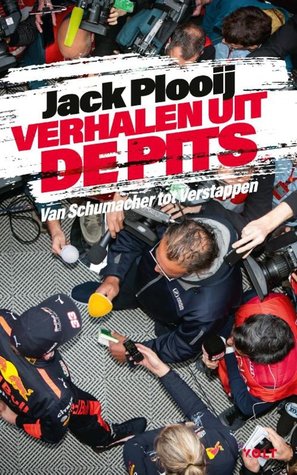 Even though I haven’t been able to read a lot, I still managed to start listening to the audiobook Verhalen uit de Pits. It’s a Dutch book about Formula 1 written by pit reporter Jack Plooij. It’s filled with stories about drivers like Michael and Mick Schumacher, Jos and Max Verstappen, Jacques Villeneuve, and Charles Leclerc, as well as about some of Plooij’s colleagues like Olav Mol, Ted Kravitz, and Kai Ebel.
I’ve always enjoyed Formula 1 and I got even more into it when Max Verstappen started doing so well a few years ago. And I’m also a big fan of Olav Mol’s and Jack Plooij’s work as commentator and reporter, so naturally I was interested in this book.
Luckily it was available as an audiobook, allowing me to multitask and get some reading done this week. When I’ve finished it, I’ll post a full review on my blog.

As mentioned above nothing new was added to my TBR pile.

What I’ve watched, what I’m currently watching & what I’ve added to my watchlist:

I’ve watched some more episodes of Cheers and have now arrived at season 10. It’s a little saddening that I’m nearing the end (it has 11 seasons), but I’m also kinda excited, because when I’ve finished Cheers I can move on to Frasier.
Frasier has become my favourite character (shared first place with Lilith), so I can’t wait to see more of him. And I’m looking forward to Niles and Daphne of course.

I’ve also started watching Tiffany Haddish Presents: They Ready on Netflix. The show consists of six stand-up specials delivered by different comedians who were picked by Haddish.
I absolutely love Tiffany Haddish. She radiates energy and her interviews never fail to make me laugh (tip: watch her on The Late Show with Stephen Colbert), so I was curious about this show. I’ve just started with the second special, so I can’t really give a verdict on it yet, but I did enjoy the first one.

And that’s pretty much it already. Apologies for this very short update. Hopefully I’ll have more to write about next week. See you then!